Do You know How Much Your Company is Worth?

We usually keep tab of money in the bank, how much our stocks, bonds, and other investments are worth and how much our home and real estate investments are worth. And we know how much debt we are in – either from a mortgage, student loans, car loans or other loans. We use these numbers to calculate our net worth, and it helps us build a nest egg for retirement. However, strangely, many entrepreneurs have no idea of how much their business might be worth. Your business could be one of the biggest assets that you may have. It is an investment of time, labor, and your financial investments. Shouldn’t you know the value of your business and try to protect and grow its value just like your other assets?

You can hire a valuation expert or an M&A advisor/business broker to get some idea about the value of your business, or you can run some back of the envelope type of calculations to get a rough idea based on your financial performance. Very often, for small businesses with gross revenues under $5 million, you will see that the value is often 2-3 times discretionary earnings (DE, also known as seller’s discretionary cash flow) or 2.5-4 times adjusted EBITDA (Earnings before Interest, Taxes, Depreciation, and Amortization). In many industries rules of thumb also calculate valuation based on a multiple of gross revenue (e.g. dentist practice is often said to be worth between 0.5-0.7 times revenue). However, for me,  cash flow, either as DE or EBITDA is a better measure because a substantial revenue without profits does not do much. 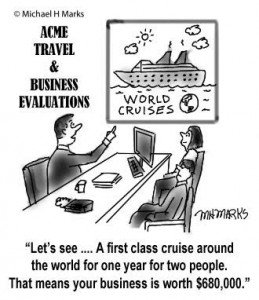 If you are like entrepreneurs shown in this cartoon, who can go on a world cruise for a year, then I would say that you have probably done well – both from profiting from your business and running the business. You have put your business on auto-pilot so that you have a management team who can run the business with minimum involvement from you. As a business owner, you want to take yourself out of a situation where the business cannot run without you. As we teach in our Value Builder advisory practice, this is one of the eight key drivers for driving the value of your business (see here for the other seven).

As 2017 is just around the corner, I hope you too will more attention to your business and see how you can grow your investment in it by taking small steps to build value. Our Value Builder score is a quick way to know in 13 minutes of where you are in terms of improving your valuation.

From all of us at TechnologyPark.com, cheers for the new year!