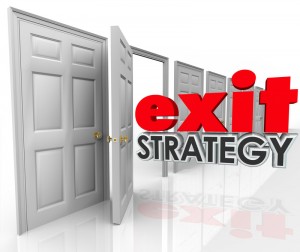 They say that every business should be started with an exit strategy in mind. It applies to any kind of business, not just the laboratory businesses.

There may come a day when you may want to retire, or running the lab become very stressful, or your health isn’t what it used to be. Do you have an exit strategy for such a day?

Exit strategy could be having a succession plan – turning over your lab to a family member whom you have been mentoring, or selling the lab to an outside company, or selling within to your employees.

Recently, in the span of a few months, we were unfortunately involved in emergency sale / liquidation of two labs that had to be sold off at a significant discount.

Sometime ago, I received an email from a lab-owner that we should talk. We set up a time to talk and he described his situation, which was really sad. He told me that his young, two-year old lab was doing well, he had found some unique niches, and the business was growing by 25-30% a year and future looked great. He was thinking of hiring more people. And then he got shocking news from his doctor about a terminal disease. But he said he was still feeling good and he had at least some time – perhaps couple of years- to plan for the future.

We tossed around a few options. Since he was feeling well at the time, and the lab was still growing well, it seemed like it might be a good idea for him to take in a minority partner, train him or her, grow the business and when the time came, the partner would buy him out. This way, the business will grow in size and value, the partner would be ready to run it and he would get much better value for his lab. We decided to talk again in a few weeks. Next month I sent him an email and received a shock when I learnt from his wife that he was no more. I can never forget that email and the shock and disbelief that someone whom you spoke to was suddenly no more.

Well, life throws you such curve balls, and in these kinds of cases, there is not much we can do. I must say, that his wife, somewhat involved in the business, was very brave under the circumstances, and was fortunate that the lab did get bought by one of its customers. I still at times think of my conversation with the lab owner and what could have been.

Another incident happened more recently. A lab-owner became too sick to carry on and his business. His business was once spread across continents, with offices in Europe. But it had to be liquidated to salvage whatever little value one could get out of it. I am sure it must have broken his heart to see something that was so dear to his him, and his pride and joy, had to be almost given away – and even then, it was not that easy.

Time to Act is Now

So what can you do starting Today, so that when the time comes, you can hand over the baton to the next captain?

Well, I will leave that to the another post.

Thank you and so long till later!